Some of it was Magic, some of it was Tragic, but I had a good life all the way. (From He Went to Paris – Jimmy Buffett) Although, I had to make lots of lemonade.

There was the smell of death. Seventeen of their friends and fellow soldiers lay in the sandy soil under poncho liners. Blow flies swarmed over the dead bodies as they bloated in the afternoon sun. When a breeze blew their covers about, the men looked away, tried not to stare. “Where’s the body bags?” someone grumbled. But yesterday, they were desperate for water and ammo.

Some of the soldiers instinctively, though aimlessly, went about finding and laying rocks on their covers, hoping to remember their friends as they were the day before — not the faces under those ponchos now. And just maybe the rocks would keep them at least partially covered from the initial 130-knot rotor wash when the Slicks came to deliver them to Graves Registration in An Khe (enemy permitting).

Here lay the lifeless men — boys, some — they had sailed here with. Many had shared a cigarette, a beer, perhaps.  They had cursed and complained during grueling training at Ft. Benning, not so many months ago. Together, they had joked, harassed, boasted, and talked about a special girl or wife back home, and what they were going to do once they got out of here.

This was their first taste of a decided battle, where they were overcome with trying to kill the enemy and save each other. When the guns finally silenced, and the battle appeared to be over for now, they hadn’t talked, they just stared at one other, then the ground. All had smelled the burning flesh, heard the same screams — been sprayed with the blood of their dying comrades.

They were in need of someone to reach out to them; at least the man who had commanded them in battle thought so.

From the book, We Were Soldiers Once … And Young. Story of the battle in the Ira Drang Valley of Vietnam,  November 1965, 1st Cavalry Division (Airmobile). By LTG (Ret) Hal Moore and journalist Joe Galloway. The movie of the same name is good as well.

As this book comes to a close, I have a decision to make.  How Do I Say Goodbye? How does it end?

All those meds that I ingested for four decades, which usually kept me continent, gave me the energy to lead a mostly normal life, are finally catching up with me and manifesting the perils of long-term usage. My immune system has virtually failed me — crippled my body, rendered it a wreck, and taken much of my vision, too.

My brain has been sapped, I’ve been robbed of much of my cognitive ability and lots of my memory, too.  Not so much, unfortunately, as to erase that little boy always in my dreams — nightmares actually — running behind our army jeep, begging for chocolate, his head about to explode on that hot-dusty road in Vietnam, so far away and so long ago. 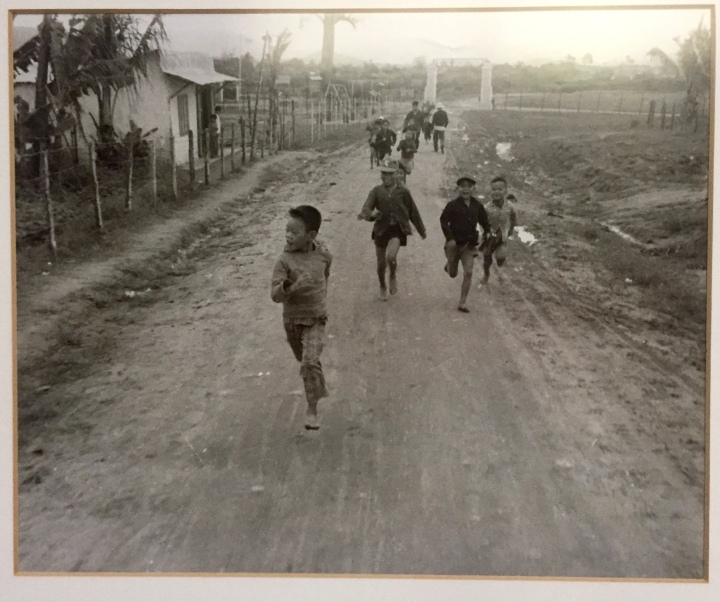 Just before the start of this final chapter, I was an inpatient at the VA Medical Center, San Francisco for tests. I knew something was up; my health had been quickly deteriorating (falling, confused, forgetting). So, I wasn’t surprised when the doctors diagnosed me with vascular Parkinsonism and leukoaraiosis (White brain damage and disease). Both diseases are related, the latter being progressive, with the likelihood of stroke, and no known cure.

(Seems I finished my book, just in time.)

I’m not on the farm in hard-time Mississippi, no sun is radiating from our old tin roof. In fact, it’s not hot at all.  But I am sweating just the same, from another nightmare of exploding abdomens, burning flesh, severed limbs, and men — boys-actually — screaming and calling out for their Moms.

I have choices for my end game. Neither is pleasant. I don’t want my book ending on a downer, and I hope you don’t feel cheated. But when you get old, having lived life to its fullest — To The Limit — something’s got to give.

Option 1: I could live on a few more years in pain and depression that overrode my good memories. End up a miserable old man, perhaps feeling sorry for myself, or hang on for a few more years while being a burden on my family, maybe without the faculty to even know what’s going on. For the last few months of my life, I could take up space and air, rotting away in a VA hospital, telling the nurses and doctors stories of bygone years. Just another old veteran in a hospital awaiting his final breath.

Option 2: I could retire with my faculties intact, while I still know my name. Should I choose to leave on my own terms; am I taking the Easy Way Out? No. It’s going to hurt like hell my body, my soul, my family, and if you believe Genesis 9:5 from the Holy Bible, my final act on earth will surely be my ticket straight to hell. Lord, you gave me a Mountain this time. How could someone who has come so far leave like this? I’ve never been a quitter, until now.

(Or I could succumb to COVID-19, leaving me no option.)

Seriously, how did you think this was going to play out? In a few months, my hands shaking from Parkinson’s, with my beautiful wife changing my bloated-flatulent filled colostomy bag, reinserting my catheter, while I reminisced with her about the great time we had on the beach at Veracruz so long ago?   Everything’s going to be OK?

I’ve gotten this far because of my loving family and readers like you who have made the last few years of my journey worthwhile, encouraging me to complete my book — making my life exciting just once more.

My Life At The Limit has been filled with joy and sadness and blessed beyond imagination, far beyond the years.  I would not trade mine with anyone.

For my Family & Friends, I’ll Remember You

You could have stayed outside my heart

but in you came

until it’s time for me to go.

(Adapted from a song written by Kui Lee)

I’ve met kind and wonderful souls, from all walks of life, all around the world. I have been blessed, and I have been burdened by all kinds of people. I’m not naive; I know what’s out there, and I can say with certitude that some are evil, incorrigible and malevolent as to be unfit for habitation in a free society. (You need not be kind to these people.) Fortunately, these  wicked cretins are in the minority. Overwhelmingly, people are decent law-abiding, altruistic members of the race we commonly refer to as human. So, I leave you with just one thing that I have assuredly learned in my 73 years, simply it is this:

“Be Kind, Everyone has a Cross to Bear.”

So simple, so easy, anyone can do it.

Today, I held Cheri for an extra-long time and tightly while telling her how much I loved and appreciated her. For my special pets — canines actually — I held them tightly too, gave each their favorite treat, and they fell asleep. Earlier, I left a message for Robert, reminding him of the love and joy he’d given me.

Usually, I leave much earlier to get the mail, but today I time my departure closer to high tide. Driving isn’t something I’m supposed to do, but it’s just a quarter-mile with no traffic to the mailbox.  I teetered outside on my carved cane to my F-150. With one foot on the running board, I clinched the grab bar, pulled myself up (painfully), and into the seat. But today I’m not stopping at the mailbox. Instead, I drive an extra quarter-mile to the shores of the Pacific and park in the two-vehicle lot for the disabled that places me just fifty feet from Big Black Sands Beach. 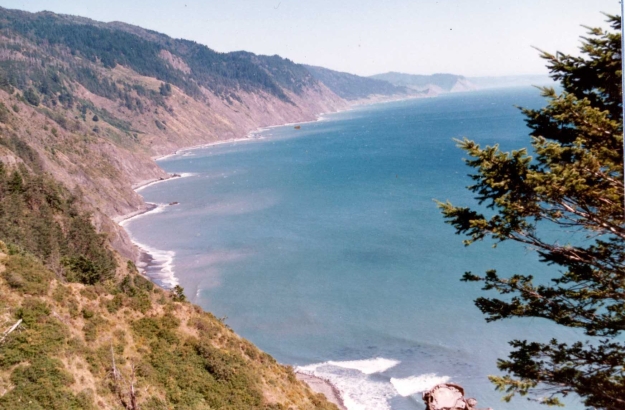 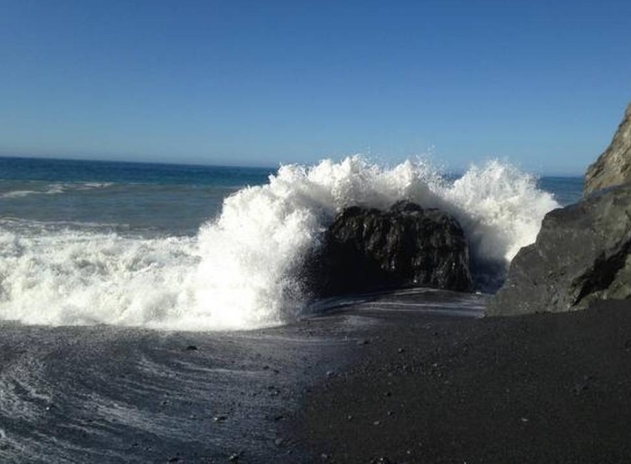 Here as the mighty waves slap and pound, then foam around the rocks, I recline the back of my seat slightly, sit perfectly still-eyes-closed for just a few moments thinking.  I can’t believe the life I’ve had, the Love Cheri has given me, the Joy from Robert, my brother too, and my friends present and departed.

Suddenly, my soul is flooded with precious memories, the ones we hope — here and beyond —  never go away.

Throughout this book, about my life, I’ve said for a variety of reasons, mostly good . . . “It could have ended right there.”   Now it will be Don Swan’s-Swan Song.

I see a red door and I want it painted Black

No colors any more I want them to turn Black

I turn my head until my darkness goes

I see people turn their heads and quickly look away

I look inside myself and I see my heart is Black

I see a red door and must have it painted Black

“Here about twice a year, the Pacific claims another Soul — Drowning by Accident in the Cold Sea. Just another statistic, Me.”

If I were able to speak to My Readers right now, I would say: “Don’t attempt or even contemplate such a stupid stunt or accident, as described above. If you’re depressed, even acutely, there are many resources that can and will help you, use them.” Eighteen veterans commit suicide every day, nearly one an hour, 1.5 times the national average for non-veterans, according the Dept of Veterans Affairs.